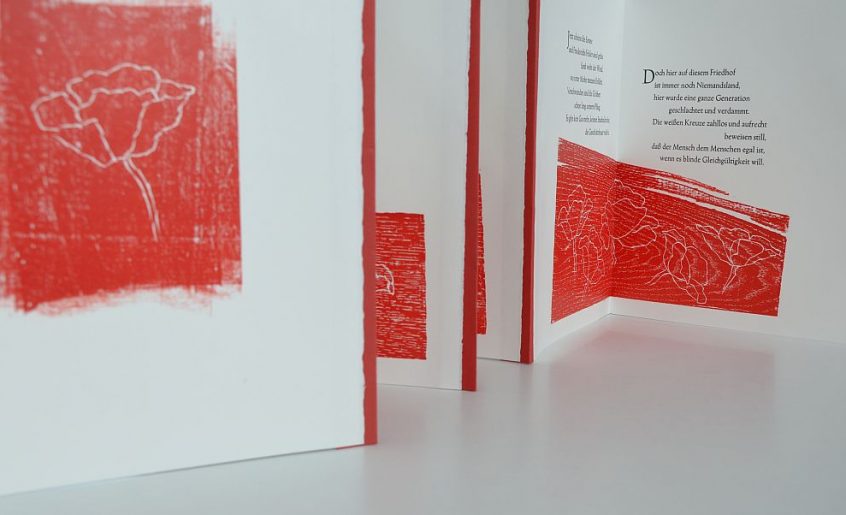 When living in England as a one year overseas student in 1984/85 I had met with the tradition of Remembrance Day for the very first time. I was touched by the way how the consequences of war were dealt with and also by the scale of it. It left me impressed and thoughtful. Years later I came across the folksong „No Man’s Land“ by Eric Bogle. It is about the countless teenage soldiers’ lives lost during WorldWar1. I felt the lyrics expressed some very deep truth. As a young man my father had been a soldier in WW2. He was severly wounded, and even though he survived the experience left him scarred in many ways. I felt I wanted to turn Eric’s lyrics into an artist’s book. I got in touch with Eric in Australia and generously he agreed that I translate his lyrics into German and make an artist’s book from it.

The text is set from a very old and severly worn fount of Trajanus. I deliberately chose this fount because the characters had been kind of wounded during the decades in which they had been used for printing. I felt this connected with what the lyrics were about. I made five woodcuts of poppies dancing in the wind. The blocks are oak wood. They were torn and slighlty faulted. I burnished them so every print is an individual like the individual people who lost their lives in the war. I made the book a concertina folding. I wanted it to display the whole text when folded out completely. It is a strong deckled edge paper and I used a special paper in poppy red to connect the sheets.

The book itself is housed in a portfolio with a latch made of box wood and a satin ribbon in poppy red. I chose box wood for its widespread use as a border around graves and for its symbolic character, beeing connected with eternal life. The work is an edition of 11, relating to the end of WW1 on November 11th. 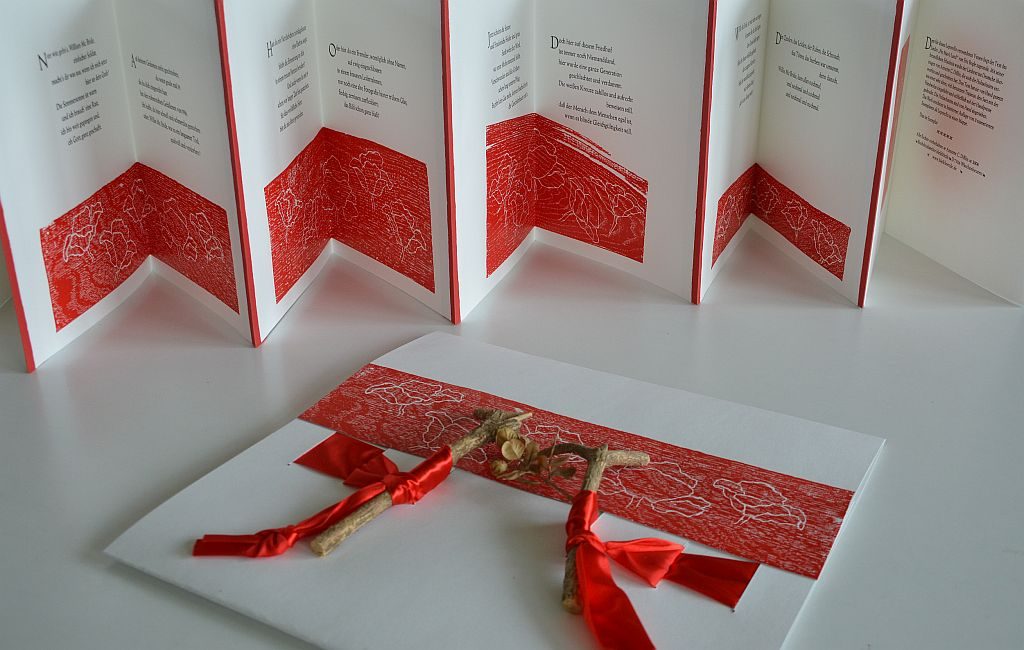 The portfolio is made of strong white paper and 41 x 40 cm of size, with a poppy-red satin ribbon and two sticks of box wood as a latch. There is one of the woodcuts burnished on to the flap of the portfolio.
The concertina book has 12 pages, 24 x 31 cm each, making it almost three metres in length when completely unfolded. The text is in German. The artist’s book was published in 2006 in a limited edition of 11 signed and numbered copies.