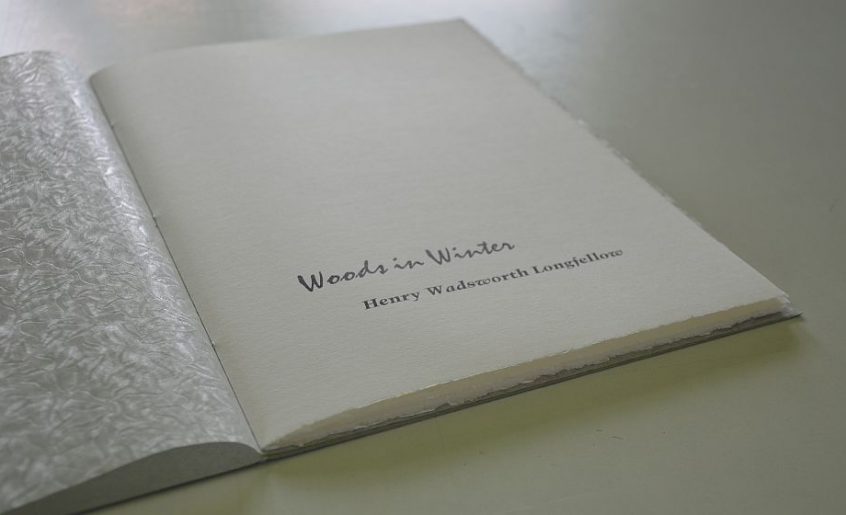 Henry Wadsworth Longfellow was an US-American author and one of the so-called „Fireside Poets“ located in New England. They were very popular writers in their time with people tending to read them by the fireside, hence the name of the group. The writers were, apart from Longfellow, William Cullen Bryant, John Greenleaf Whittier, James Russel Lowell and Oliver Wendell Holmes Jr., with Ralph Waldo Emerson included occasionally.
Lonfellow was born in 1807 and died in 1882. From 1826 to 1829 he travelled Europe and learned German, French, Spanish and other languages. Before setting out on this journey he had graduated and was already fluent in Latin. He translated Horace and in his later life Dante’s Divine Comedy (the first translation ever by an American).

The poem „Woods in Winter“ counts as one of his earlier works written before the age of ninteen. It tells of cold and icy winter with the prospect of spring and summer to come. All of the book resembles cold and icy temperatures: the colours are shades of white, grey and blue, there is a glassine sheet with frost pattern sewn in as an endpaper. I came across this poem in a very nice little book, published in 1911 with a very William-Morris-style design I bought in a bookshop in Scotland. Its title is „The Poems of Henry Wadsworth Longfellow 1823-1866“ and it used to be part of the inventory of the Ross and Cromarty County Library. It still carries its loan card with the last date of loan rubber-stamped as 16 April 1970. 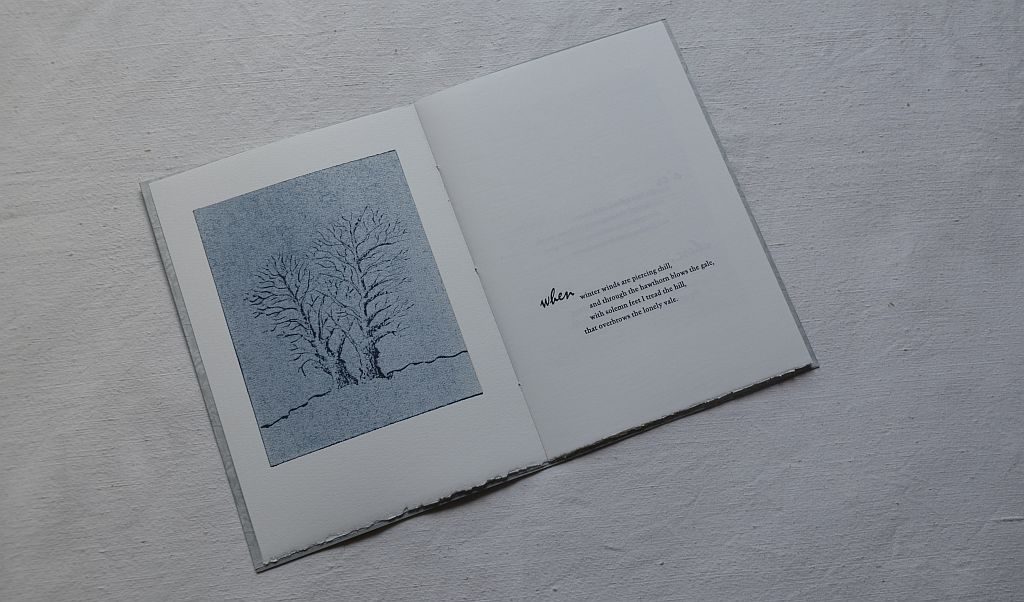 The artist’s book is a portrait format of 17 x 24 cm and comes with 12 pages, the 4-page cover and a sheet of plassine paper with frost pattern. Design, typography, linocuts, printing and binding are all my own work. The text is in English. It is hand set from Trump mediäval and Mistral and printed on a Zerkall deckle edge paper with undulating laid lines. The two linocuts are printed on a heavy quality of Zerkall deckle edge paper. The cover is burnished from an old weathered board on grey Gmund Bee paper. The book is a pamphlet stitch sewn with ice blue linen thread. It is 17 x 24 cm and was published in 2014 in an edition of 10 numbered and signed copies. Copy No 1 is the special edition and comes with the linocut “Trees in Winter” as an original print enclosed ready to frame.