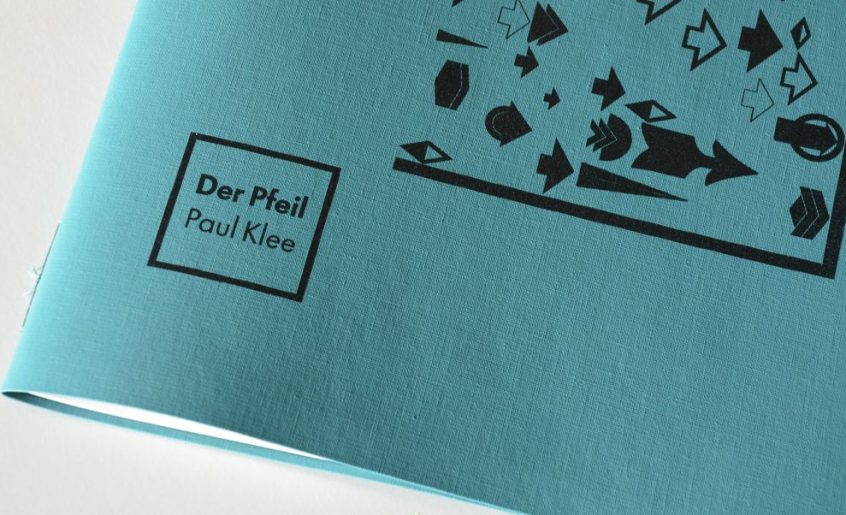 Paul Klee was 42 years of age when he took up teaching at bauhaus in Weimar. His „Pedagogic Sktechbook“ was first published in 1925 by Walter Gropius and Laszlo Moholy-Nagy as volume 2 of the series „bauhausbücher“. From this book Paul Klee’s notion of the arrow ist quoted and made the theme of this artist’s book. The ideas of Klee’s are very philosophical and touch the ultimate predicament of mankind in that the mind can reach much farther than the body.

The artist’s book is a square – referring to the basic geometrical forms used at bauhaus. Paul Klee’s writing is accompanied by five philosophical sayings from Friedrich Schiller, Lord Byron, one Arabic and one Persian saying plus one Chinese saying. All text and the book as whole are designed using bauhaus’s basic geometric elements of the dot, the triangle and the square. The six texts are arranged to form a long arrow.

A large number of metal type arrow ornaments of all sorts and styles has been used to visualise mankind’s predicament in the book and on its cover. Even one Sagittarius is amongst them, referring to the spiritual notions at bauhaus. The book is printed on two qualities of Rives Dot paper. Printing is done on my Grafix proofing press. All text and ornament are hand set from metal type. The metal type founts used are Futura, Garamond, Baskerville, Legende and Present. The turquois colour is a reference to the use of colours as is known from Paul Klee’s paintings.

The book is a square of 29 x 29 cm. It has 8 pages plus the 4-page printed cover and is a twin pamphlet stitch bound in old turquoise bookbinding cloth. Idea, design, typography, printing and binding are all my own work. The book has been published in 2019, 100 years after the bauhaus was founded in Weimar. It is an edition of 10 numbered and signed copies. Number 1/10 is the special edition coming with an additional broadside with the text-filled arrow printed on Zerkall deckled edge paper (225 gms). This copy has been acquired by the Klassikstiftung Weimar for the graphic collection at bauhaus.