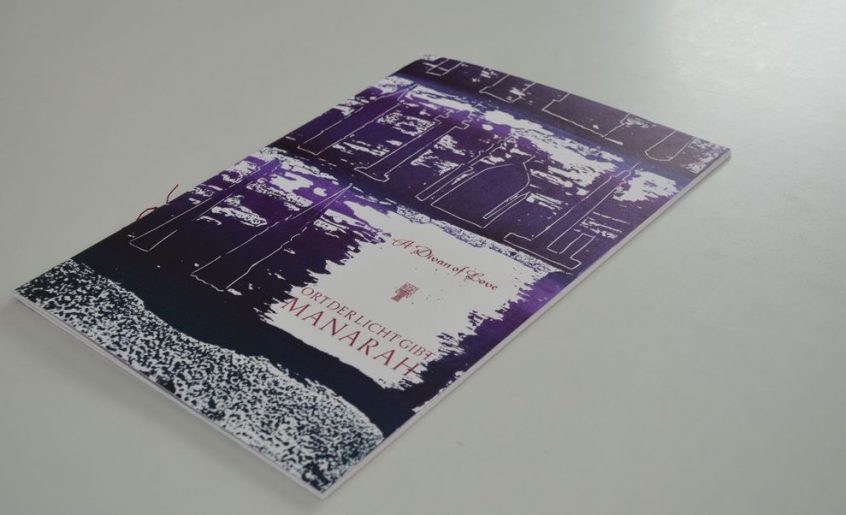 All poems have been handset from metal type, and designed individually using borders and ornaments. Founts used are: Titula, Rhapsodie, Schadow, Bernhard-Schönschrift, Bürgerschaftsfraktur, Quick, Legende, Parlamentsfraktur, Liturgisch, Trump mediäval kursiv, Straßburg, Diskus, Trajanus, Stahl.
The title illustration is a lino-etching. It shows a number architectural structures that are shedding light into darkness, amongst them lighthouses and houses of prayer with various kinds of spires.

Manarah 3: A Divan of Love. Size 24x32cm. 16 pages + cover. Pamphlet stich with red linen thread. Printed on „Pfeil&Bogen“ 250gms using a cylinder proofing press (KORREX). All poems in their original language (either German or English). With two lino-etchings: title and portrait of Joseph von Eichendorff printed from the original linoblocks. Choice of poems, typography, design, lino-etchings, printing and binding all by Annette C. Dißlin. Limited edition of 24 numbered and signed copies. Published in 2011.

This is me: Annette. I’m a bookish girl. How could I possibly not end up in the book arts? This image was taken at a colleague’s workshop, at Heinrich Buser’s Greno Printing Office. I was assisting with printing at his Heidelberg windmill which was, I admit, a very special experience. I myself don’t own such a magical machine. My presses are …