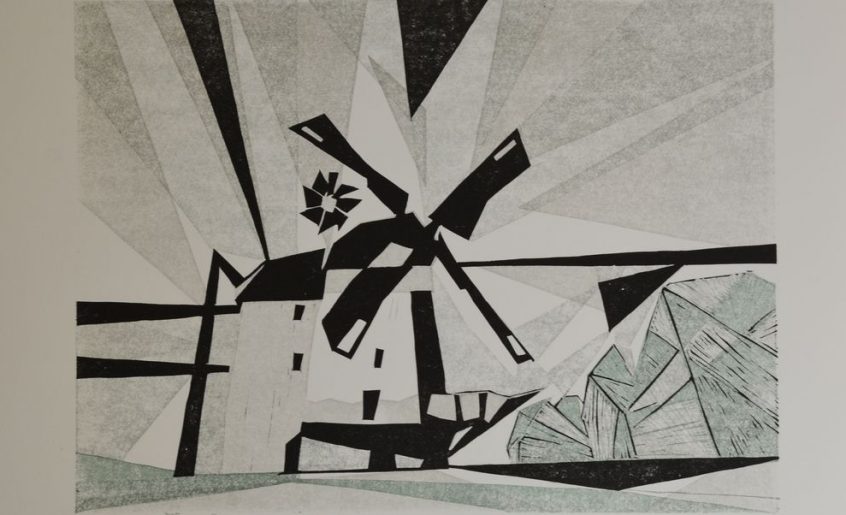 The mill prints is a series of colour linocuts that show some of the windmills along the mill trail in Westphalia where I am located since 2016. Each single one of them is a personality in its own right. Their individual histories of change and the fact that they have been built for the single purpose of turning the energy of wind into power to drive a mechanical process and with this turn grain to flour or tree trunks to boards or nuts to oil, they are the perfect symbol for change as such. These mills have fascinated me ever since I moved here. Ten of these mill prints are illustrations in the recently published artist‘s book „nicht bleibt wie es war“ (nothing remains as it has been).

The design of the prints is inspired by ideas of some of the arts movements in early 20th century, mainly cubism. Since cubism generated from painting integrating its ideas in relief printmaking is somewhat of an adventure and my work on this is experimental. I have done a lot of research around these arts movements in the early 20th century, including the work at Grosvenor School of Modern Art in London around Claude Flight.

As I write this work on the series of mill prints is still in progress. I shall be showing all prints here once the series is completed. For printmakers’ day there will be a selection shown here. So, stay tuned and safe the dates when more of the prints will be shown: 1-3 April at the fair in Hamburg-Barmbek (go to the “Showcase” category for details of the fair) and the show on the studio‘s premises in summer. Details for the latter will be on here as soon as they are finalised.

Wegholm (Petershagen)
This tower mill on a mound has good company from a small post-and-beam construction baking house. The mill was built in 1861 to replace an older mill at an estate. In 1899 the original tail poles were replaced by a fantail.
Linocut: 3 blocks, BFK Rives 250gsm, 2021

Oppenwehe (Stemwede)
This post mill was built in the early 18th century and relocated to Oppenwehe in 1868. Eight horses were needed to move the central pivot, the post. In 1900 a steam engine was added to drive the mill and the saw. 1943 the storm broke off one of the sails. The clothed sails are of the German type and are special in that they turn the other way round as would be usual, which is particularly common in the region of Westphalia-Lippe.
Linocut: 5 blocks, Zerkall 225gsm, 2022

King‘s mill Todtenhausen
Like all king‘s mills Grossenheider King‘s Mill is a tower mill with rubble walling built in mid 18th century. The tower is slim, windows and doors are small. The mill is still fitted with its original tail poles. There is an alley of lime trees lining the path to the mill.
Linocut: 4 blocks, BFK Rives 250gsm, 2021

Nordhemmern (Hille)
Built only in 1938 Greftmill is one of the youngest around. It stands like a souvereign in the wide and open countryside on a drive-trough mound. The tower is built from coarse sandstone. Originally it was fitted with tail poles, but a fantail was put in place which is particular in that it has nine sails (instead of the usual eight).
Linocut: 4 blocks, Zerkall 225gsm, 2022

Destel (Stemwede)
Lovingly called „Ballerina-Mill“ this smock mill was built in the early 19th century. A circle of lime trees was planted to surround it and the trees are pruned regularly so in summer the mill looks like a ballet dancer dressed in a green skirt.
Linocut: 5 blocks, Zerkall 225gsm, 2022