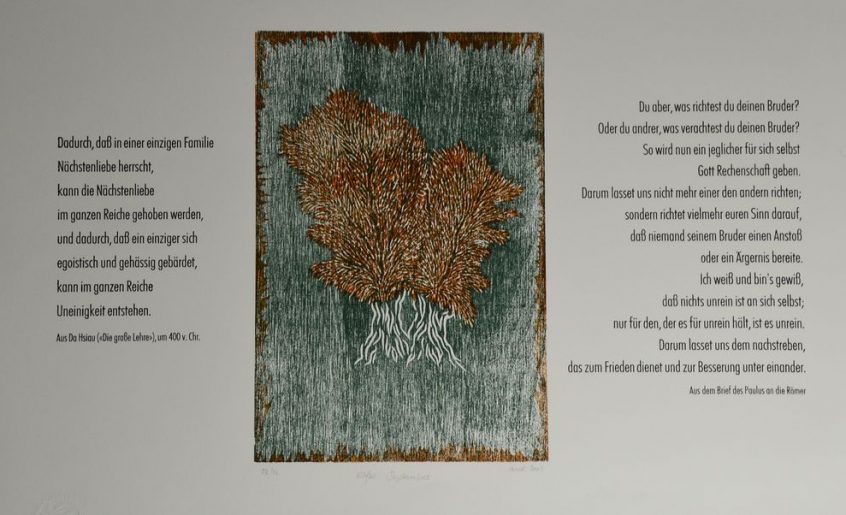 On 11 September 2001 an unprecedented act of terrorism destroyed the twin towers of the World Trade Center in New York (USA) and killed thousends of people. Shortly after I came across this twin-trunk tree on an autumnal walk not far from a very special location: Nördlingen Ries, which is an impact crater formed by a meteorite crashing here around 14 million years ago.

On the basis of the sketch made back then I designed a colour woodcut with two blocks. In the 9/11 incident the east and the west clashed in agression. The idea for the art work was, that the tree was to throw the bridge between east and west, it should build a connection between both the wisdom of the east and the thinking of the west – the work was to make visible that we all, as human beings have the same basic needs, worries and wishes. In choosing the texts it became obvious that eastern wisdom and western thinking are not that far apart. The eastern text was taken from a book by the title „Da Hsiau“ which means as much as „The Great Lesson“, presumed to be written by a student of Kung Dse around 400 BC. For the western tetx a passage from Paul‘s letter to the Romans was chosen from the New Testament.

Both writings show the road to peace in life is one of understanding and empathy. Thus they tell of the the core longing of man for respect, acceptance, empathy and a life in peace and safety. However, a peaceful life will not come out of the blue. It needs to be earned. We all will have to make the effort of being understanding and empathic to our fellow human beings. We‘ll have to train this over and over again, and with practice this effort will become very gradually more easy. And this effort is more than worth while. It is the only path promising to be successful in gaining peace and a life in safety for humankind.

The texts for this broadsheet have been composed by hand from condensed light Futura and printed on a manual KORREX proof press. The form was inked with handrollers. The paper is Hahnemühle deckled egde white, velin, 230gsm with an original size of 61x88cm. The size of the broadsheet is ca. 61x45cm. The edition is 22 numbered and signed copies, printed in 2001.