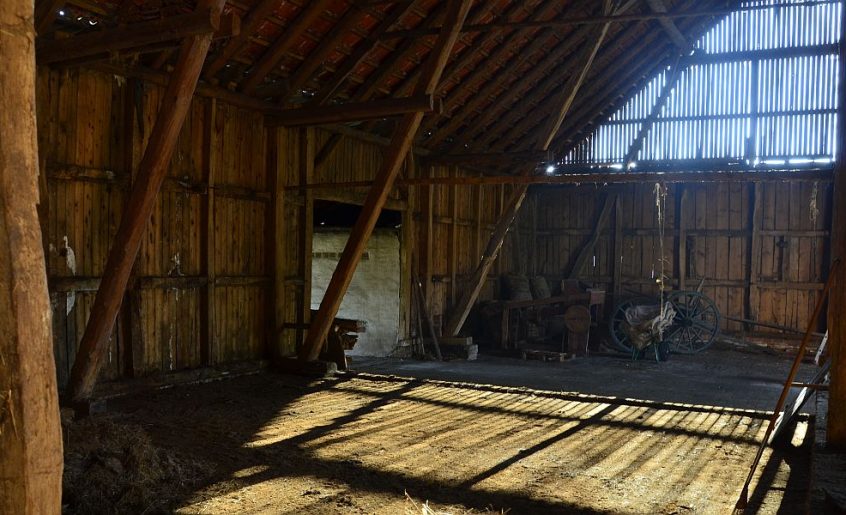 Dessert for Printmaker‘s Day 2022 at The Fork and Broom Press will be served from 25 – 28 August in the barn next to the studio in Oppenwehe.
There will be a pop-up gallery in the old barn showcasing the brandnew artwork and a special „director‘s choice“ from the backlist.

Our old barn has been the location for readings celebrating the 20th anniversary of the studio back in 2019. Strong oak beams carry the wooden construction creating a huge space with a lot of atmosphere, almost magical. This time around the barn will turn itself into a gallery space with prints hung to the walls and books sitting on plinths. Add to this, there will be places to sit and rest, like deckchairs and sofas.

The three days from 25 to 27 August will be the first ever Wayzgoose at The Fork and Broom Press. Traditionally marking the end of summer, the annual Wayzgoose was held around St. Bartholomew‘s Day – i. e. 24 August. This being the beginning of that time of year, when daylight would not be sufficient for working indoors anymore and candles would have to be lit. In the old days there would have been merry eating and drinking. In our days the Wayzgoose gives opportunity to show the new books and work created and published in the past year – which is exactly the idea for Printmaker‘s Day at the Fork and Broom Press.

There are a number of stories around the „Wayzgoose“ and how it came to be the printers‘ gathering at the end of summer on or around St. Bartholomew.

Bartholomew originally is the Saint and patron of parchment makers. But with the craft of papermaking spreading and at last establishing itself in Europe paper gradually replaced parchment. It appears that in this course papermakers somehow inherited the Saint and patron Bartholomew. For making paper pulp needed to be made in the first place. This process started with gathering old fabric, which was done during springtime. Over the summer the fibre was worked into what would become pulp. By the end of summer, i. e. around Bartholomew‘s Day, the papermakers would empty and clean their tubs. The last sheets to be produced from the old pulp would not be used for printing but for making window paper. In the old days windows were just openings in a wall. For keeping out the winter cold these openings would have to be closed by putting in glass, which only the rich could afford. Those for whom glass was too expensive would use parchment, and, in the times following waxed paper. Traditionally fixing glass, parchment or paper to windows was done on St. Martin‘s Day, i. e. 11 November. One could speculate that the printers‘ gathering was set for Bartholomew day because there was a break in paper delivery until the papermakers had the first sheets ready made from the fresh pulp.

But then the reason could have been much more simple. Summer days are long and the light will be good for working until late in the night. By end of August days are shorter already and soon there would be the need to light candles indoors for work. This would be a good time to take a break from busy weeks or even moths, celebrate a successful working season and show what is new.

This exactly is the idea of „Printmaker‘s Day“ at The Fork and Broom Press: to show what is new, what has been published in the past year. In 2018 artistic printmaking techniques have been awarded the status of cultural heritage. And as of 2019 the studio The Fork and Broom Press not only has been part of „Printmaker‘s Day“ but also is part of the new „Journeyman Years“ effort, the aim being to pass on knowledge and expertise in letterpress printing and working with metal type to the younger generations.

Now there will be the first ever „Wayzgoose“ at The Fork and Broom Press, a tradition that has been part of the printer‘s trade for what must be centuries, and is still treasured among English speaking printmakers on both sides of the Atlantic ocean.

For this first ever „Wayzgoose“ the barn turns itself into a gallery space showcasing the new artist‘s book „Nichts bleibt wie es war“ and the brandnew series of mill prints, all colour linocuts on classic deckled edge paper, as well as an interesting choice of art works on the backlist.

Opening times of the Wayzgoose pop-up-gallery in the barn are:
25-27 August 3pm to 7pm each day

Plus: Extra opening hours for Regional Mills Day
On Sunday 28 August we celebrate Regional Mills Day (Kreismühlentag) and with the brandnew series of mill prints being at the centre of the exhibition the pop-up gallery in the barn will be open on that day between 11am and 4pm.

Want to know more about the “Journeyman Years of letterpress”? Find details and links in the category „Stories from the Printroom“