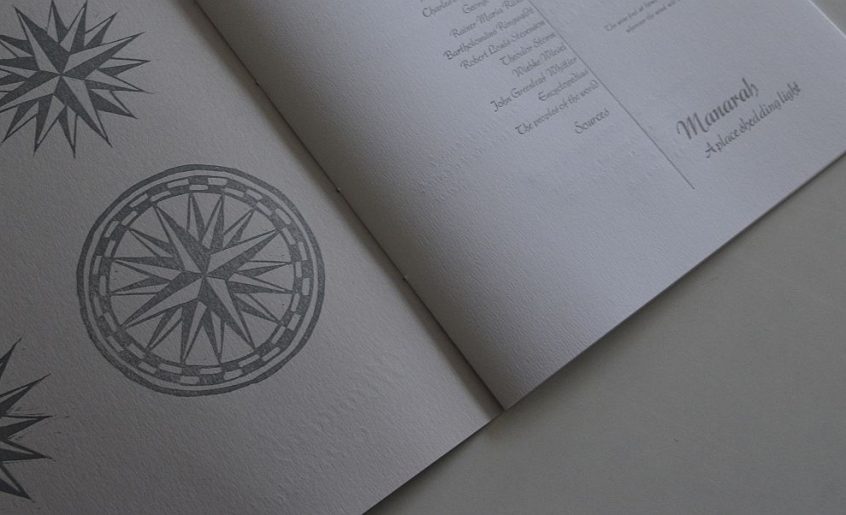 Wind is an almost constant force in the place we moved to in 2016. Sometimes it is just a soft breeze, sometimes it is gale force gusts. It will blow roses and hyrangeas and young climbinf beans to pieces at times and make rain drift past the windows almost horizontally. It will make itself heard when howling around the corners of the old brick farmhouse. During the summer months it sometimes teams up with hail. In the winter of 2017/2018 it came with the bitter cold of the beast from the east.

Making wind the theme of the first artist‘s book in the just relocated studio was the choice to be made. The book is a collection of sayings, poems, prose and facts about wind – as if they all had been blown into this place from all corners of the world by a gust. Mankind had to face wind ever since. There was no way to ultimately shelter from its destructive force. Wind could be made use of in some cases with sailing boats and wind mills. But the risk of the wind gaining too much strength and wrecking either was always looming. The wisdom of the people of this world show, how they experienced wind. The book, too, tells the story of the Beaufort scale.

The design of the artist‘s book is as if the wind had blown together the sayings and aphorisms and poems and just dropped them down on the pages. Amongst the authors are Robert Louis Stevenson, Abraham Lincoln, Homer, Rilke, Storm or Whittier. The books tells of the ancient Greek wind gods, too. The book is issue 4 in the series Manarah, the first three issues of which were published in 2011 as my contribution to the al-Mutanabbi-Street-Inventory project.

Manarah 4 comes with seven linocuts. Texts are in English and German – there is a separate booklet carrying the English translations of all German texts. The book is a pamphlet stitch binding with 16 pages. Text has been printed in a shade of grey on Rives Basane paper of 170gms. The cover has been printed on silvergrey Rives tradition 250gms. The Chinese sign for wind has been printed on Japanese paper. The book‘s size is 27×35 cm. It was published in 2018 in a limited edition of 20 signed and numbered copies.
Price Euro 55.00 plus p&p
Price for the set of issues 1+2+3+4 Euro 145.00 plus p&p
Orders & info via email

Manarah is a series of limited-edition magazin-like artist‘s books printed letterpress, illustrations being woodcuts or linocuts. Each issue deals with one theme.

PS: Manarah is an old arabic term. It was used for lighthouses or road signs, and in the overall sense of a place shedding light or giving orientation to somebody trying to find their way. It later developed into the word minaret.